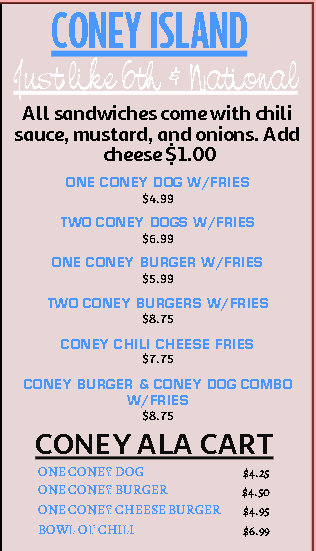 When Coney Island restaurant closed in 2009, generations of longtime patrons were distraught. For 60 years, from his diner at 530 W. National Ave., owner Mike Syrrakos had served up hot dogs slathered in his own special secret Coney Island-style meat sauce. At age 89, a few months after closing his doors that August, he announced that his place was for sale. He sold the building, but the recipe for the beloved Coney Island sauce sat, unused, unloved. Now, thanks to a friendship between Syrrakos and one loyal customer, those beloved Coney Island dogs are back on the menu of a Milwaukee-area restaurant.

Last November, Terry Romine Jr. and his sister, Nicole Romine Fuhrman, purchased the recipe from Syrrakos' two daughters. Last week they added 'Milwaukee's Original Coney Island Hot Dog' and 'Milwaukee's Original Coney Island Burger' to the menu of the family-owned business they manage together, Romine's High Pockets. Syrrakos' daughters, remember suggesting after her father sold his building that he also sell the secret sauce recipe. He told her, 'When I die, you can sell it.' Not long after, Mike  died in 2012; her mother followed in 2013.  'People loved the hot dogs, and my sister and I weren't really going to do anything with it.' While going through their father's stuff, she and her sister, 'You have to call the Romines.''  Having lived away since 1978, Holly Syrrakos didn't know the family, but she tracked down Terry Romine Sr., and they got to talking. The two dads had been friends. Romine Sr. and his son stopped in at Coney Island restaurant at least once a week. Senior Romine had asked before about the recipe. Negotiations began in earnest. Although another person also was interested, 'We settled on the Romines because we thought they had the best ability to move the chili sauce back on the market,' Syrrakos said.

Getting the recipe was 'kind of his death wish,' Romine-Fuhrman said of her father, who passed away last July, just before his 67th birthday 2013.
But turning over the recipe involved a bit of detective work on the part of the Syrrakos daughters. There were written copies, Holly Syrrakos said, but each was a little different. Fortunately, about five or 10 years before the restaurant closed, her parents made a video of themselves making the sauce.For final details, she contacted the Foran Spice Co. of Oak Creek that for years had custom-blended the sauce's seasoning mix. 'They won't release the information to anybody, but I had the account numbers and knew all the information, so they worked with me to clear up some questions I had,' she said. (The Romines also are using Foran to blend the spices.)

The sale was completed in November, and Syrrakos went to Romine's one day to work beside Terry Romine Jr. to make the sauce as her father used to. She declared it to be 'spot on.' The process involves simmering the sauce 5 to 6 hours, in 60-pound batches, in a steam kettle. 'You can't make this on the stove,' Romine said. 'It's a very slow process.' The new owners The Romine's had to sign papers agreeing never to disclose the recipe; Romine and Romine-Fuhrman alone have access to it. They wouldn't disclose the purchase price, but Syrrakos said it was 'a fair deal.' Without giving away any ingredients, except for ground beef, Romine said none of the 17 or so seasonings would be considered 'exotic,' but that there are definitely some surprising additions - including 'a couple of things I would never put in my chili.'  Besides meat and seasonings, the sauce includes a few other ingredients. Romine's father and son had tried to create the sauce on their own - 'we didn't even come close,' Romine said.

​Just as at the original restaurant, the sauce at Romine's is slathered on both hot dog and bun - chopped onions and yellow mustard optional - as well as on a burger. Romine's uses Oscar Mayer turkey-chicken-pork dogs, nestled in regular, steamed buns. This is not something the mess-averse diner would want to pick up and try to eat - though many purists do just that. The Syrrakos family is happy with the outcome.'We're glad it's going to go back into the special foods of Milwaukee,' Holly Syrrakos said of her father's sauce. 'Otherwise it would have just wound up being a piece of paper in our boxes. We really didn't want that. 'And the best thing is, when I come to Wisconsin, we can go eat chili dogs.'